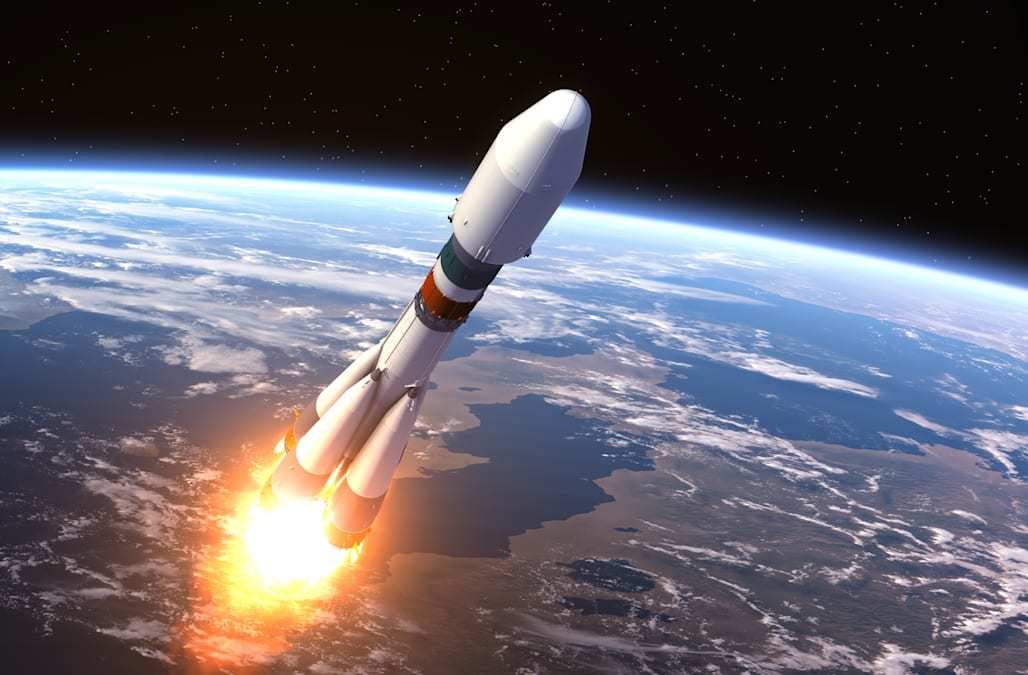 Ever wondered how we put satellites and astronauts into space? Well wonder no further! In this article we'll be going through the physical basis of how rockets are put into space through a series of short videos (and written explanation).

Putting things in space is not cheap, and unfortunately NASA did not pick up the phone despite me insisting that it was for an educational project. So I've resorted to using computer models for this exercise.

For today's mission, we'll be taking off from the launch site and putting ourselves into orbit. Then, after leaving a satellite in orbit and taking a few swanky images, we'll be safely heading back down to Earth. Hopefully by the end of this article you'll understand a bit more about Newton's laws of motion, and have gained an intuition for how moving around in space really works (hint: it's not like being on Earth)!

Before we begin let's start with some basic principles:

These basic principles are super important when we need to put a rocket into space, because we need to get around that pesky gravity problem and we also need to make sure the wind doesn't stop our rockets.

So let's start with that gravity issue. Even if you jump super high (like, outside of the atmosphere high), you will still be pulled back down by gravity. So how do we stop this? Well what if as well as climbing very high vertically, we could also move so fast horizontally, that we never fall back down? 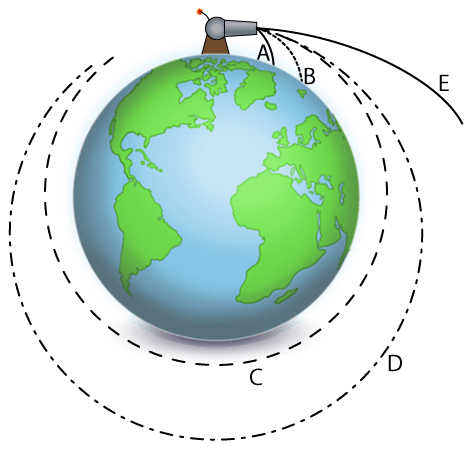 A huge cannon can fire cannonballs into orbit and beyond!

Imagine that we had a huge cannon already outside of the atmosphere (to remove that wind problem). If we could fire it horizontally relative to the surface of the Earth, you would see different paths traced by those cannonballs depending on the speed at which they're fired.

The first two balls (A and B above) are not fired very fast, and despite initially having the vertical height they are pulled down to the surface... but the other balls are also all being pulled down to the surface? In fact, what if we could move so fast that the cannonball just misses the surface, but because of gravity it keeps getting pulled towards it. In effect, it would continually fall towards the Earth forever! This is what is happening with balls C and D above. Finally we could fire one fast enough that escapes the Earth's gravity though note it can't ignore it, that why there's still curvature in E.

We begin with our Rocket on the launchpad. But Earth's gravity is huge, and we need to boost enough that we can both escape the atmosphere, and have enough fuel to then put us into orbit, and home again! This means we need a huge rocket... but all that fuel weighs something! This is a tough balancing act Scientists need to make when designed rockets. Thankfully, the Earth is small enough that the gain in energy to get off-planet is greater than the weight of the fuel - but that is not the case everywhere in the Universe! It can cost $10 000 or more just to put 1 kg of mass into space, how much would you cost?

(Warning, quite loud!) At the start of our launch, we're moving veerryy slowly. This is because our rocket is so heavy, that despite the force ejected by engine it's only just enough to overcome the force of gravity (notice the little green men in the bottom right... they're loving it)!

As we gain height we get faster and faster. This is because our rocket is causing us to accelerate. Remember Newton's first law? Well we already have the speed gained already and that rocket is still going - causing us to go faster and faster! As we get higher and higher as well the force from Earth is less (though still more than enough to pull us back without that rocket), and the wind resistance is getting smaller as the atmosphere gets thinner. There's another reason we're going faster as well, can you think what it is? (Hint: it's got something to do with the mass of the rocket...).

Here I'm looking at our trajectory map. You can see that even though I've only been heading vertically upward I've somehow gained an arc trajectory (i.e. I'm not coming straight back down where I took off from). This is because the Earth is spinning below me, so even though I haven't moved horizontally (yet), the Earth has!

This also means there's a specific east vs. west direction we want to head in. If we go west to east, we follow the direction of the rotation, meaning we already have some bonus horizontal momentum to save on fuel! If we went the other-way, we'd have to overcome the momentum the direction of rotation has already given us. This is why all planets and natural satellites, like the moon, orbit in a specific direction - in fact this is followed almost everywhere across the galaxy, unless there's been some funky gravity incidents like planets being flung out of their home solar system, but that's for another time. Also, if it wasn't obvious already this isn't Earth, but a planet quite similar!

You can see that the trajectory is still inside the atmosphere. Still got a ways to go!

Now we've put some distance between ourselves and the surface so the wind resistance is smaller, it's time to start adding some horizontal velocity into the mix. This and the vertical force I'm still exerting will mean I'm increasing the time to the peak of my flight, called the apoapsis. Remember though, we still need to get out of that atmosphere, so I'm still focusing on going up mostly for now.

As we exit the atmosphere, I'm slowing down the engines and titling my rocket more towards the horizontal so it's parallel to the surface. This means I can maximize fuel efficiency to get into orbit, since I'm already at a height that wind resistance won't be a problem, and it's the horizontal speed that will stop me crashing into the planet while the force of gravity continues to pull me toward it.

If I start accelerating just before my apoapsis, I can maximize my fuel efficiency once again since I've got the vertical height to not worry about the atmosphere, and since I'm still in freefall while moving to that maximum distance from the planet, I don't need worry about having to fight against the force of gravity! This means I won't have to stop myself falling back into the atmosphere while also trying to accelerate horizontally.

The moment I'm in the atmosphere an additional force will be acting to slow me down, definitely something I want to avoid with only a limited fuel supply. Also remember, without that atmosphere to carry sound, you can't hear anything. In space, no one can hear you scream: "SCIENCE!"

You can see how efficient we've been here. With only a little boost from a rocket we can push the trajectory just enough that we won't come crashing down on the other side of the planet. Now we're in orbit! Notice that now we've got our apoapsis still, and a new point in the orbit representing the closest point relative to the surface, called the periapsis.

Ooops, looks like our initial booster rocket has run out of fuel. No point carrying that dead weight around, time to eject!

Now we've ejected the shell that was protecting the satellite (and minimizing wind resistance before), we can twist our rocket around 180 degrees using small propellants on the sides of the rocket, called reaction control systems (RCS). Remember there's no way to push against anything in space since it's a vacuum, there's literally nothing in it! So we need to use rockets and mini rockets to move anything.

We want to be in a position to increase our orbit on the other side of the planet so we can put the satellite in a stable orbit, that is - one where it won't just skim the atmosphere and slow down until it falls. Since we won't twist around as we move around the planet and we need to boost into the direction of our orbit to increase it, we can twist ourselves now ahead of time.

Just inspecting the craft (and admiring the view)!

Again, we're at our apoapsis. To get the most gain from our fuel, this is the place to burn since it's the maximum distance from the planet, meaning a small displacement here means a huge one when we've swung round. For this, we burn into the direction of the orbit, called prograde. This cheeky maneuver allows us to make our orbit a little more symmetrical as well, and ensures our satellite won't hit that atmosphere.

Time to say goodbye to the satellite...

Now we need to get ourselves home. Similar to before where we burned into the direction of orbit (prograde) in order to increase it, this time we want to burn against it, this is known as a retrograde burn. This way we can cancel that horizontal momentum and let gravity do it's thing. Remember, if we burned straight toward the planet we'd still have all that horizontal (or at this point circular) momentum, so we might miss it still!

Now we're at the perfect place to start decelerating. Notice the debris field from the bits of satellite and booster we used before. Space junk is not good!

Speed up time to show the effects of our burn! Notice how our rocket stays in the same position? This is why we needed to do those movements before with the RCS.

We've swung quite low and are starting to skim the atmosphere (now we can hear again)! This is not great though because the heat could destroy the craft if we don't have our heatshield ready, so we need to slow down quick!

Note this is why we increased our orbit before with the satellite. Otherwise it could have skimmed the atmosphere and slowed down. Even if it then escaped and went round again, each time it passed through the atmosphere it would slow down just a little bit more...

That's a bit more like it! We need to slow until our trajectory makes contact with the planet. I did a little bit extra here because I wanted to aim for home and had extra fuel, but in principle once we've made contact with the atmosphere (like above) that's enough.

Finally, we remove our unnecessary boosters so they can burn up and let the heat shield on the front of the landing pod protect us. Then, as we get close to the ground we let loose our parachutes for a safe sea landing. (So close to home!)

A job well done! I hope you've learnt something along the way. You can comment below if you have any questions of further topics you want us to talk about!

A question for you...

Take a look at the picture below. In which direction (A, B, C, D) should we accelerate in order to minimize the amount of fuel needed to change our trajectory so we can get to the moon? Answer in the comments below! 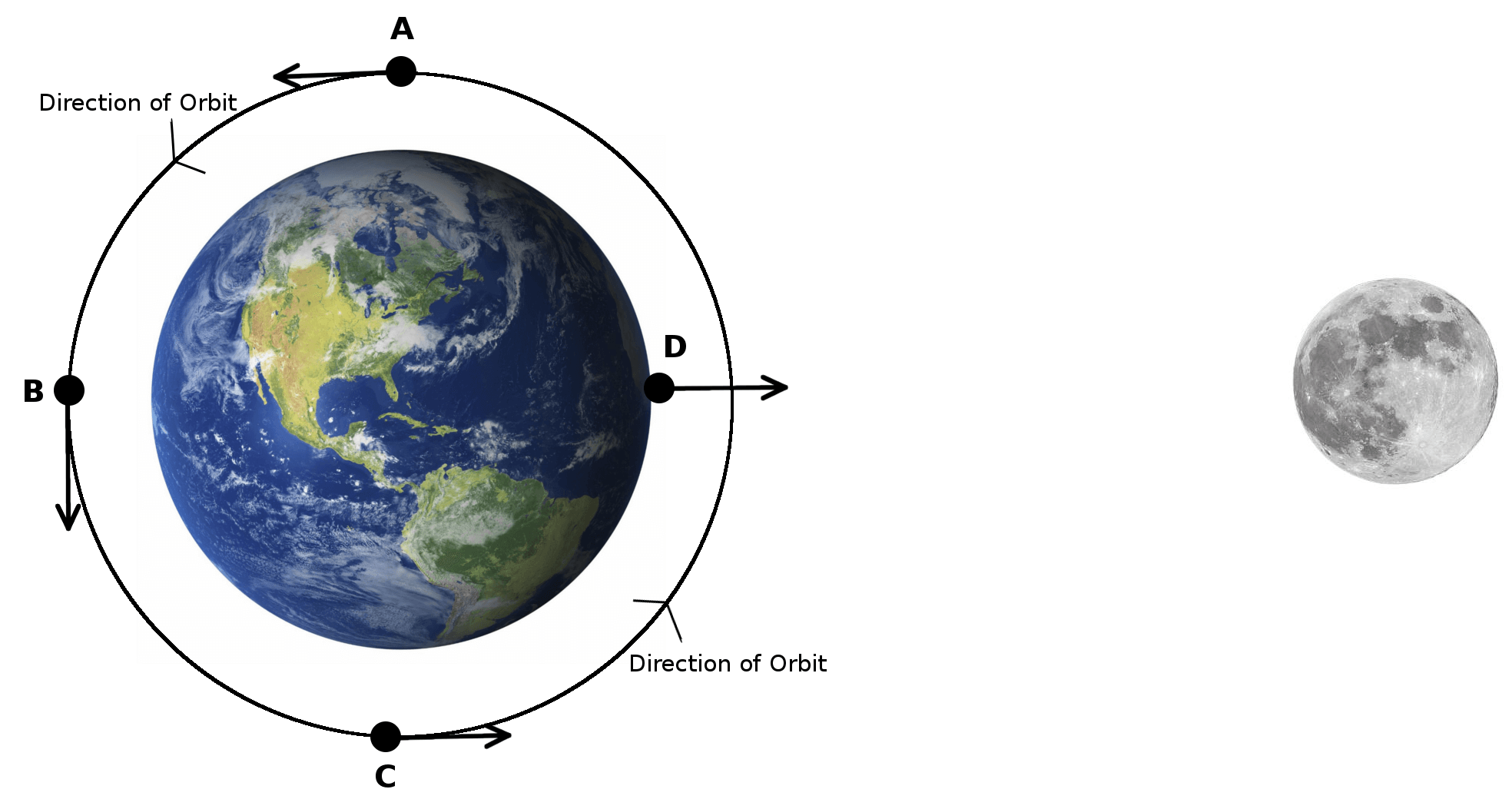 All videos were captured in Kerbal Space Program, a hyper realistic space flight simulation video game, and an excellent learning resource for obtaining an intuitive grasp about rockets and orbital mechanics! It is available on the Steam store, but please note it is not free and does have some minimum system requirements. (This is not a sponsored article).

If you're interested in these topics and more, sign up today with us and have live chats with real life scientists!